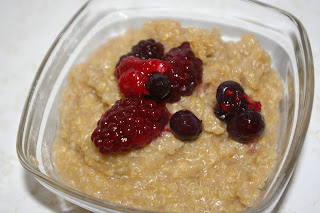 I've mentioned before how much I love breakfast.  Especially for supper.  There's something so "comfort food" like about brupper, don't ya think?  I've also mentioned that I cook brupper once a week.  It makes planning my menus easier knowing one meal is always pre-determined.  But even so, I like to keep things ineresting.  Eggs are a staple.  Beyond that, you never know...I might just get crazy!

All that to say, I'm always looking for good, and new, breakfast recipes.  I wasn't sure what to think when I found this recipe for Quinoa Porridge.  I've had quinoa before, and always liked it, but it's always been an alternative to rice or maybe couscouse.  Quinoa and porridge haven't ever really gone in the same sentence in my kitchen before.  But when I saw the other ingredients, specifically cinnamon and honey, I wanted to try it.  I was not disappointed.  This quinoa is very similar to oatmeal, so if you like oatmeal, you're sure to like quinoa.

Why quinoa?  Without bogging you down with too many details, while quinoa is cooked and eaten like a grain, it is technically a seed and is related to spinach, chard and beets.  Quinoa is high in protein, but the protein it supplies is complete protein, meaning that it includes all nine essential amino acids.  In addition to protein, quinoa offers many other health-building nutrients. Because quinoa is a very good source of manganese as well as a good source of magnesium, iron, copper and phosphorus, it is arguably beneficial for people prone to migraines, diabetes and atherosclerosis. Finally, for those of you concerned about gluten, quinoa is naturally gluten-free.

I'm not advocating make a total switch from oatmeal to quinoa.  Oatmeal is also a healthy option especially for lowering cholesterol.  But it's nice to switch things up a bit, right?  And with this recipe, because the honey is added prior to cooking, it's the perfect amount of sweetness.  Yum.  My.  Top it with some fresh fruit and you're golden.

Heat a saucepan over medium heat.  Add quinoa.  Season quinoa with cinnamon and cook until toasted, stirring frequently, about 3 minutes. 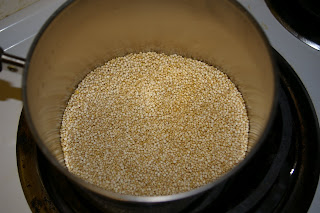 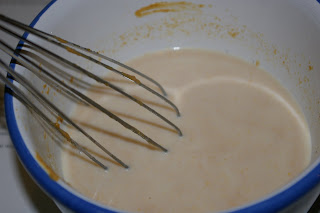 Add to quinoa.  Bring to a boil, then reduce heat and cook until porridge is thick and quinoa is tender, about 25 minutes.  Add more water if needed.  Stir occasionally, especially at the end to prevent burning.  Top with fresh fruit or raw nuts.  (Or both). 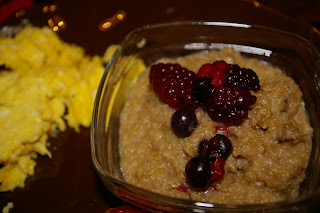 Printable Recipe
(Recipe from "The Real Food Diet Cookbook" by Dr. Josh Axe)
Pin It
Posted by Snacks and Desserts at 6:40 PM